This is the buttercup you’re most likely to pick and hold under your chin to see if you like butter!

Buttercups are widespread and common perennial plants found in meadows and pastures, parks, gardens and at woodland edges. But can you tell the difference between these two types of buttercup?

Meadow buttercup is a tall and stately perennial flower, flowering from April to October and growing to 90cm tall. Meadow buttercup has yellow flowers, about 2cm across, that comprise five, shiny petals. It has rounded leaves, divided into three to seven lobes, and does not possess the runners of Creeping Buttercup. It’s stem is not furrowed

Creeping buttercup is the common buttercup, it is shorter – at just 50cm – than the meadow buttercup and flowers only from May to August. It’s long, rooting runners help it to spread across lawns, which is its distinguishing feature. It has three-lobed hairy leaves and the sepals encircle the petals. Its stalks are furrowed. 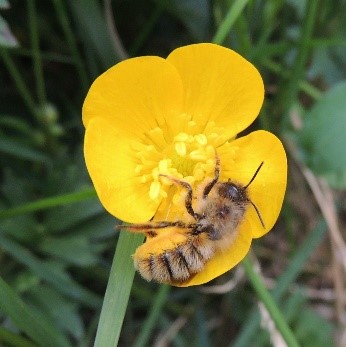 Buttercups are pollinated by short-tongued bees attracted by the nectar and pollen. They are able to reach the food with their tongue because the flower is open with a flat shape.

About the Author: Fresh DPS